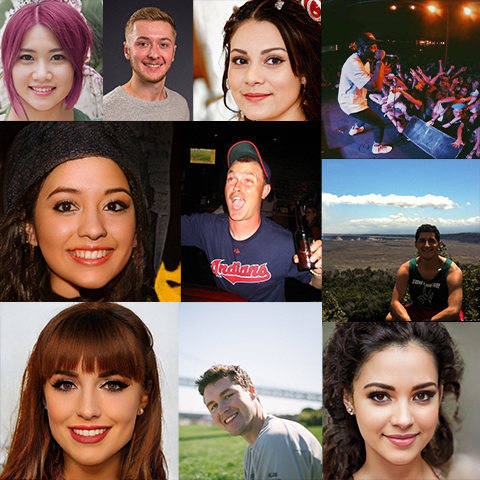 One of the first things the Federation did after their arrival was to establish a higher-education alternative. This Federation Acculturation and Cooperation Tract (FACT) relies on Connectors like Bill Martin to train a generation of Praetors, human emissaries who will work directly with the Federation during the integration of Earth into their galactic empire. Though Subsumption focuses exclusively on the FACT class at the University of Utah, the program is global in nature—but always based at traditional educational institutions.

While Marcus Adams, Jordan Kilravock, and Velia Wolf are part of the thirteen students enrolled in Bill’s class, they’ve been described in detail in earlier blog posts. Today, we’ll introduce the other ten students who embody the best aspects of humanity as it prepares to face the Confederation invasion. Each of these Praetors-in-training represents a different persona of human nature. What follows is free of spoilers, meaning it only tells part of their full stories.

According to her pseudo-boyfriend and “cerebrating” co-conspirator Jordan, Bonnie is a special kind of lady. When she isn’t distilling whiskey, she’s busy completing past life regressions to understand her time in the pharaoh’s household. She shares Jordan’s compulsion to explore her own consciousness with the assistance of mind-altering substances, especially in tandem with electronic dance music. She’s close with Ameda and spends most nights in Marcus’s basement dancing while Jordan produces songs. She loves role-playing (with Jordan mostly) and has a soft spot for moralistic gossiping.

If it weren’t for Bill, Ameda would’ve left the university to focus solely on his rapidly rising rap career. But the elderly FACT teacher was insistent about their class needing Ameda’s perspective as its only black student and how that would also help humanity once he became a Praetor. In the end, Ameda found a middle way by balancing his studies and his artistry, the latter bonding him to Jordan. But music isn’t the only way these friends collaborate; Ameda is also a conspiracy theory connoisseur who doubts the Federation’s real intentions and the Confederation’s identity (assuming they even exist).

Maybe it’s because he’s training to become a soldier or maybe it’s just his nature. Either way, Quinn is an unapologetic Irish loudmouth with a quick wit (though Bill still manages to get the best of him from time to time). With his bright red hair and a huge smile, Quinn always makes the class laugh. He often sides with Marcus whenever the trustworthiness of the Federation comes up. He can be boastful and brash, but his profanity-laced language is a smokescreen for his brilliance; on multiple occasions, he’s intellectually outflanked Jordan and destroyed him during their heated classroom debates.

Lindsay is in a league of her own compared to the other FACT students. For starters, she has the privileged position of being Bill’s teaching assistant. But her infallible memory, eagle eye for details, and uncompromising work ethic are orders of magnitude above the average college-age student. She’s an old soul and an erudite individual who gave up a promising future as a literary editor to become a Praetor. She felt this was a fair trade since she dreams of reaching the stars. Unlike most of the other FACT students, her opinions on the Federation versus Confederation controversy aren’t publicly known.

Su may speak softly, but she’s an intellectual powerhouse. Born in Indore, India, she came to Utah to earn undergraduate degrees in mathematics and computer science. She continued on to graduate school and was almost through her Master’s degree in Information Systems when the Federation arrived. She jumped at the invitation to join FACT even though it meant abandoning her traditional degree. She’s always the first person to pair up with Marcus when given the chance, and as one of Bill’s two international students, she brings a different, but needed, perspective to their discussions.

The other international student in Bill’s class is Jack, a data science expert who loves everything about his vegan lifestyle. Having been raised in California for most of his life, he has no trace of his parents’ British accent. He’s naturally skeptical about everything, including the Federation, since there’s insufficient data available to predict what their real intentions are. Despite his proclivity for numbers, he’s a true renaissance man and has read extensively in a wide range of subjects, including biology and Roman history (especially how it’s inexorably connected to the history of the British Isles).

Ashley is so quiet that the rest of the class occasionally forgets she’s there. Though she’s a California native, most people assume she’s a Korean immigrant because of her reticent nature. But whatever the cause for her shyness, when she does finally speak up, it captures the full attention of the other students. She’s a well of wisdom waiting to be discovered, and like many of her other classmates, is versed in a wide range of intellectual subjects. But unlike the other students, she shares Bill’s distinct ability to make profound connections between seemingly disparate disciplines.

Shortly before Marcus started pursuing Dianna, he had his heart set on Nicole. During their Pre-New Era education, they’d both been enrolled in a History of Rock and Roll class, but she shot down his proposition for a date. After more than a year of being enrolled in FACT, the details of Nicole’s life still remain a mystery to the rest of her classmates; she simply doesn’t talk about herself. Ever. What little is known is that she has an eye for art and admires the work of Viktor Frankl but thinks humanity has a constrained ability to make choices because of uncertainty and the limitations of finite knowledge.

Named after the nefarious Argentinian Communist, Che is the affable son of immigrants, though he typically sides with the capitalist faction of the FACT class. He has the body of a Greek God, a smile that lights up the room, and contagious booming laughter. He’s comfortable admitting the failings of his knowledge and is open-minded and flexible in his beliefs when given new evidence, which he’s willing to scrutinize from all possible sources. After Jordan, Che is Marcus’s favorite classmate. He’s also a huge fan of Jordan’s Hive Humper music and loves attending electronic dance music festivals.

Like Ashley, Charles trends toward the quiet side of the classmate spectrum. An avid outdoorsman who regularly trades hiking tips with Marcus, his main claim to fame is being a descendent of Benjamin Franklin. While Charles has a uniquely personal relationship with Bill in and out of the classroom, like with Nicole, little else is known about this FACT member. But Marcus has noticed that Charles’s eyes move at an incredible rate during the raging classroom debates, a sign he’s not only listening but also rapidly processing all the information. How he’ll use this skill to assist humanity is yet to be proven.

Some Additional Details About Bill’s Students